Donald Trump is stepping back only slightly from his refusal to say during his debate with Hillary Clinton Wednesday night whether he would concede if he loses to her on Election Day.

Trump now says he will accept “a clear election result” but still reserves his right to “contest or file a legal challenge” if he loses, but he says he won’t lose.

Less than 24 hours after facing off in their final debate, Hillary Clinton and Donald Trump were all smiles as the both attended a Catholic charity dinner in New York. Both spoke, both poked fun at each other, and both took the barbs in the spirit of the night.

“It’s great to be here with a thousand wonderful people, or as I call it, a small intimate dinner with some friends. Or as Hillary calls it, her largest crowd of the season,” Trump quipped to laughter.

“Donald if at any time you don’t like what I’m saying, feel free to stand up and shout ‘wrong’ while I’m talking,” Clinton said in a reference to Trump’s trademark interruptions during debates. 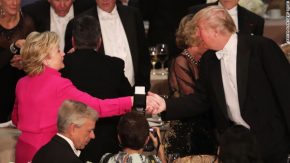 Unlike at their last debate, Clinton and Trump shook hands at the charity dinner.