All fourteen contenders for the federal Conservative leadership crowded onto a stage in Moncton, New Brunswick last night for the second official debate of the lengthy race. 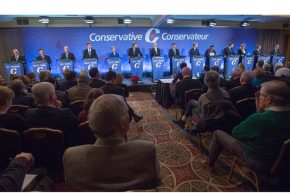 They discussed a broad list of issues ranging from the economy to crime to pipelines.

The debate also included a few shots at fellow candidates.

After Kellie Leitch spoke about her plan to screen immigrants for “Canadian values,” Maxime Bernier accused her of playing a karaoke version of U.S. President-Elect Donald Trump.

This was the first bilingual debate of the campaign, and only a few of the candidates are fully proficient in both official languages.

A debate in Quebec City on January 17th will be in French and the remaining two will also be in both official languages.