A judge in Hamilton, who wore a hat with Donald Trump’s slogan in a courtroom last November, is no longer being assigned cases. 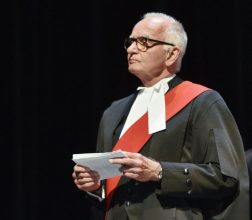 The incident raised concerns about his impartiality, and complaints about the incident were filed to the Ontario Judicial Council, a body that investigates the conduct of provincially appointed judges.

Zabel later called his behaviour a ”lapse in judgement,” and issued an apology to the courts, the bar and his colleagues.