The search continues off the Florida Keys for an award winning Toronto filmmaker and conservationist. 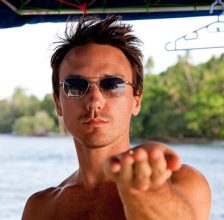 Stewarts’ parents, Brian and Sandy Stewart, have flown to Florida. His Mom says the support to find their son is incredible.

“There’s so many people who have volunteered. Boats are out there, divers, people in planes. Richard Branson sent a helicopter. Richard Branson said Sharkwater was one of the most important films he’s ever seen,” Sandy Stewart said as she choked back tears.