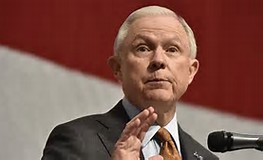 Donald Trump continues to defend US Attorney General Jeff Sessions who is now the second high-ranking member of the new administration to take a hit over conversations with Russia’s envoy to the U.S.

Sessions admits he did meet twice with the Russian Ambassador during the election campaign while he was both a Senator and a Trump campaign surrogate, but says he doesn’t recall the two ever discussing the campaign and claims he did nothing wrong.

Sessions is refusing to resign but has recused himself from any probe that examines links between Trump aides and Moscow.

Russia’s top diplomat says the uproar over Sessions’ meetings with the Russian ambassador is a replay of McCarthyism.  Foreign Minister Sergey Lavrov says that contacts with officials and lawmakers are part of any ambassador’s duties.  He says the pressure on Sessions strongly resembles a witch hunt.
The Sessions case echos a similar controversy involving retired General Michael Flynn.  He resigned as national security adviser two weeks after misleading White House officials about his own discussions with the Russia’s US ambassador.