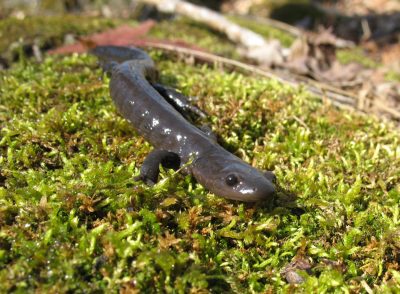 Burlington, Ontario has a soft spot for an endangered amphibian – so the city is stopping traffic on King Road – to enable the Jefferson Salamander to make it safely to breeding ponds – in the area of the Niagara Escarpment.
Since 2012 Burlington has been closing King Road for about three weeks a year – to help improve survival of the Jefferson Salamander – which can live for up to 30 years.

The little creatures have a grey or black-coloured back with lighter under-parts – and can be up to 20 centimetres long. They emerge from the ground in the spring in southern Ontario – to make their annual trek to breeding ponds.

Burlington Mayor Rick Goldring says the program – which begins tomorrow –  has been a huge success – and no salamanders have died on the road since the closures began.

The Jefferson Salamander is protected at both the provincial and national levels – and was added to Ontario’s endangered species list in 2011.

The rare amphibian is also getting help in York region – where people have built a series of tunnels under some roads – to help increase survival.