U.N.'S HUMAN RIGHTS HIGH COMMISSIONER CALLS OUT TRUMP FOR SOME OF HIS POLICIES

The U.N.’s high commissioner for human rights has spoken out against some of Donald Trump’s policies.

“I am dismayed by attempts by the president to intimidate or undermine journalists and judges,” said Zeid Ra’ad Al Hussein made his comments today at a Human Rights Council session in Geneva.

He’s also concerned about the impact of Trump’s order banning U.S. entry to people of six majority Muslim nations, saying “vilification of entire groups such as Mexicans and Muslims and false claims that migrants commit more crimes than U.S. citizens are harmful and fuel xenophobic abuses.” 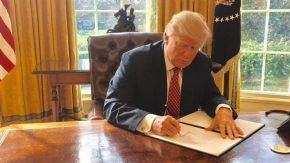 A move in Hawaii is underway to challenge the U.S. president’s revised travel ban.

A motion filed in federal court in Honolulu yesterday says the state wants to amend its existing lawsuit challenging Trump’s previous order, which was blocked by the courts.