It’s a worst nightmare for cyclists in the city, when a driver in a parked vehicle opens a car door in their path. And it seems that’s happening more often these days. 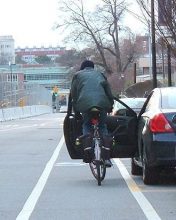 Toronto Police data obtained by the bike advocacy group Cycle Toronto shows incidents of “dooring” are on the rise. Last year, there were 209 collisions caused by dooring. That’s up from 175 incidents in 2015 and 132 the year before that.

Jared Kolb is the executive director of Cycle Toronto and says “these are life changing collisions that can result in serious injury or death.” He speculates that dooring is happening more often in part because more people are choosing to ride a bike for their everyday trips. But Kolb says the problem is that the pace of the rollout of cycling infrastructure in Toronto has not kept up with demand.