CANADIAN MUSICAL 'COME FROM AWAY' NOMINATED FOR A TONY AWARD

The award nominations for the Canadian hit musical Come From Away just keep on coming, with the announcement this morning that the musical has been nominated for a best musical Tony award!

Yesterday, The New York-based Chita Rivera Awards nominated Come from Away for outstanding ensemble in a Broadway show and outstanding choreography. 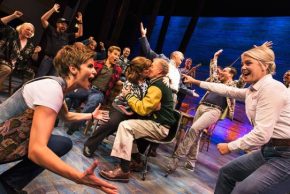 The play is based on the town’s people of Gander, Newfoundland who sheltered nearly 6600 passengers and crew from 38 planes diverted when U.S. air space was closed after the September 11th attacks in 2001.

Come From Away played to sold out crowds at Toronto’s Royal Alexandra Theatre early this year before heading to Broadway. It’s set to return to Toronto in February 2018.