There was a “punny” exchange on the floor of the Ontario Legislature yesterday, as Progressive Conservative MPP Rick Nicholls questioned an Ontario government grant of $120,000 toward a giant rubber duck for Canada’s 150 celebrations.

“To the premier, that answer is really ‘quacking’ you up,” Nicholls said to groans, “One giant rubber ducky, $200,000 out of taxpayers’ pockets. This absurd waste of taxpayers’ dollars is an absolute cluster-duck.”

Even the Minister of Tourism, Culture and Sport Eleanor McMahon joined the chorus of jokes, as she defended the Wynne government’s decision to rent the world’s largest duck as an example of “the fun that people are going to have this summer.”

“Our investment in this festival which does include this historic duck, and who doesn’t like ducks Mr. Speaker, again not ducking the question, you know I’m not against ducks. Perhaps the member opposite doesn’t like ducks. I’m all about them. Perhaps we should ask the minister of Natural Resources and Forestry, who also likes ducks,” McMahon rambled. 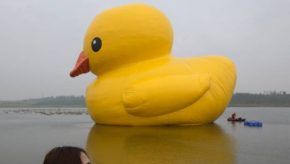 The giant yellow rubber duck is based on a piece by Dutch artist Florentijn Hofman.

It’s six storeys tall and weighs 13,600 kilograms, and is being brought to Toronto by the Redpath Waterfront Festival at a total cost of $200,000 combining other funding such as corporate sponsorship. It’s being billed as a tourist attraction and will also be taken to other communities in Ontario.