ARREST MADE IN 401 CEMENT BLOCK TOSSING

Ontario Provincial Police have a 32 year old Pickering man in custody in the case of concrete cinder blocks being thrown off three 401 overpasses in Toronto over the past week. 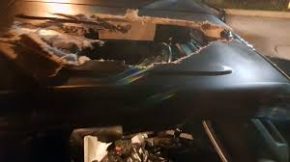 The first incident occured last Sunday night when a vehicle was struck by falling debris near Yonge Street.  There were two more occurrences yesterday.  In the most serious incident (shown above) a cinder block in a bag was thrown over the Progress Avenue bridge and ripped through a vehicle’s roof ending up in the back seat.

OPP Sgt. Kerry Schmidt says it is only by pure luck that no one was killed