Another TTC employee has failed the agency’s new random drug and alcohol screening, which was implemented last month.

TTC spokesperson Brad Ross confirms the individual tested positive for drugs, bringing the total number of people with failed tests to five since the May 8th start date.

The first two positive tests were discovered on the first day of implementation, one by alcohol and the other by drugs.

Two more positive cases were discovered on June 1st when two employees were found to be under the influence of drugs. 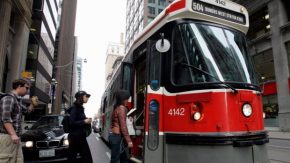 The positive tests at the TTC have prompted questions about whether GO Transit employees should be exposed to random drug and alcohol testing. Metrolinx spokesperson Anne Marie Aikens says the issue is bigger than this.

She says Metrolinx takes a zero tolerance approach to drugs and alcohol in the workplace, and if at any time a supervisor detects that an employee may not be fit to operate a motor vehicle, the employee is removed from such duties.

Anne Marie Aikens and Brad Ross join Jane Brown on Zoomer Radio’s Fight Back with Libby Znaimer after the noon news today for a discussion on the issue of drug and alcohol testing.