There is shock and sadness in London, England and around the world after a deadly massive apartment building fire in the North Kensington area of London. 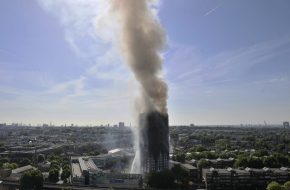 “The incident that’s occurred overnight is truly shocking,” explained London’s Metropolitan Police Commander Stewart Cundy, “It’s going to take a period of time before we understand what has occurred and the investigation is going to be complex and as you would expect, very very thorough.”

The death toll in a massive apartment building fire is expected to climb from the current tally of 6, as firefighters continue their search and recovery efforts.

The blaze broke out around 1 am local time, turning the 120-unit Grenfell Tower into a 24-storey inferno, as more than 200 firefighters battled the blaze.

Seventy-four people were sent with injuries to five area hospitals. Twenty of them are in critical condition.

Witnesses report people jumping from the building and in one case a woman tried to save a baby by dropping it from a window on the ninth or 10th floor. The baby was caught by someone on the ground below.

London’s Fire Brigade says a structural engineer and urban search and rescue crews have assessed the stability of the smouldering tower and believe it is NOT in danger of collapsing.

Some residents of the building had formed a community organization to oppose a nearby re-development project, and have been warning about the risk of fire at the tower since 2013.