U.S. TRAINING MISSIONS UNDERWAY IN GUAM AFTER TRUMP DOUBLES DOWN AGAINST NORTH KOREA

U.S. training missions are underway in the American territory of Guam amid heightened tensions with North Korea.

They come after U.S. President Donald Trump said on Thursday that maybe he wasn’t tough enough when he vowed earlier this week to unleash “fire and fury” on North Korea if leader Kim Jong-un continues to threaten the U.S. 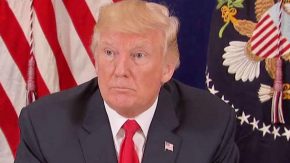 “He does something in Guam, it will be an event, the likes of which nobody’s seen before what will happen in North Korea…you’ll see, and he’ll see,” Trump threatened.

Trump was addressing reporters during his vacation at his New Jersey golf club before a security briefing with top advisers about North Korea’s threat against the U-S territory of Guam.

Earlier on Thursday, North Korea announced a detailed plan to launch a salvo of ballistic missiles toward Guam.