HOW MANY ASYLUM SEEKERS CROSSED INTO CANADA LAST MONTH? NEW NUMBERS OUT TODAY

New figures are expected today on the number of people who illegally crossed into Canada to seek asylum last month.

These will include a final tally of a massive surge in arrivals, specifically in Quebec. 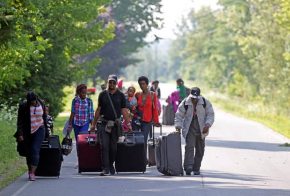 Some 12,000 people have crossed the border into Quebec since the beginning of the year, but today’s breakdown will be specific to August.

Immigration Minister Ahmed Hussen has said that while the number of daily arrivals has come down since a spike in late July and early August, the Trudeau Liberals are still keeping close watch on the situation.

Critics of the situation blame Prime Minister Justin Trudeau, who tweeted back in January, “to those fleeing persecution, terror and war, Canadians will welcome you, regardless of your faith. Diversity is our strength. #WelcometoCanada.