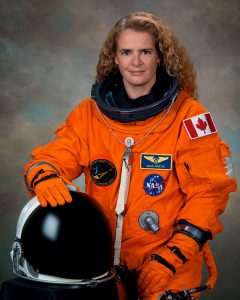 Canada has a new Governor General.

Former astronaut Julie Payette has taken the formal oath of office – in a traditional ceremony on Parliament Hill – to become the country’s 29th Governor General.

The 53-year-old took the oaths as the Queen’s representative – and the  Governor General and commander-in-chief of Canada – as well as the Keeper of the Great Seal of Canada.

With Prime Minister Justin Trudeau looking on – the audience included justices of the Supreme Court, political and Indigenous leaders and other dignitaries including former governors general, several provincial premiers – and Payette’s friends and family.

Much of the ceremony is dictated by protocol but Payette herself chose the music, which includes a rendition of Leonard Cohen’s “Hallelujah” sung by Joannie Benoit and Melissa Bedard.

The Juno Award-winning Tafelmusik Baroque Orchestra and Choir – of which Payette was a member – also performed.