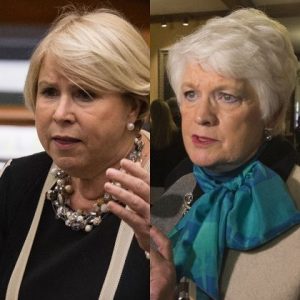 Deputy Premier Deb Matthews and Treasury Board President Liz Sandals say their decision not to seek re-election next year – has nothing to do with the fact that the Liberal party is struggling in the polls.

Matthews will remain as the Liberals’ campaign co-chair through the election – and says she’s sure Premier Kathleen Wynne will be re-elected next spring.

And Sandals says she’s decided to retire after 30 years of service – adding she’s ready to be a full-time grandmother.

Most recent polls put the governing Liberals behind the Progressive Conservatives.