Prime Minister Justin Trudeau will be in the GTA on Monday to unveil changes to his government’s controversial small business tax reform proposals as the governing Liberals try to re-establish themselves as the champions of middle-class Canadians.

The prime minister will be in Stouffville at 11:30am where he’s expected to honour his campaign promise to lower the small business tax to nine per cent from the current rate of 10.5. 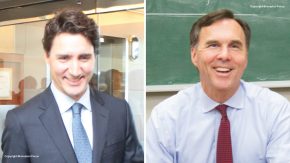 The Liberals have been scrambling to undo the damage from weeks of controversy over proposed tax reforms for private corporations.

Finance Minister Bill Morneau said he needs to ensure the reforms are targeted more clearly at the wealthy, then do a better job explaining to Canadians why the changes will benefit the middle class.

“The fact that farmers won’t be impacted, we need to make that clear, the fact that small businesses will be able to continue to invest in their business which is what we want and won’t be worried about passing their business to the next generation, we’re going to communicate that clearly, so moving forward, we’re going to get this right and we should always expect that in healthy democracy there’s going to be debate around making changes that are right for the long term but challenging for today,” Morneau explained in Washington on Friday.

The proposed reforms have been met by criticism from doctors, lawyers, farmers and opposition MPs. When the proposed changes were unveiled, the Liberals said they were intended to stop wealthy individuals from using small businesses tax rules to unfairly reduce their income tax burden.