How much did you spend on your breakfast bagel this morning? 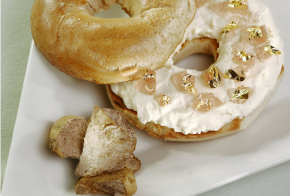 New Yorkers with a taste for an expensive city staple will have an opportunity to try the $1,000 bagel when it returns to the city next month.

The Westin New York Hotel in Times Square is bringing back the extravagant bagel for a limited time after it first appeared in 2007. The bagel will reportedly feature Alba white truffle cream cheese, goji berry-infused Riesling jelly and golden leaf flakes.

According to the hotel, white truffle is the second most expensive food in the world after caviar.

And what’s comforting if you can afford it,  is that 100 per cent of the proceeds will go to Holy Apostle Soup Kitchen.