More than a thousand people gathered in Toronto’s Nathan Phillips Square last night for a special sing-a-long to pay tribute to Gord Downie. 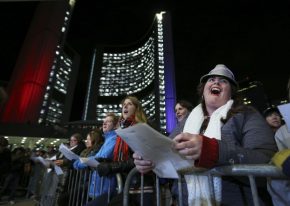 Nearly two years ago, the Canadian musician, poet and activist was diagnosed with glioblastoma, an invasive brain tumour with one of the poorest survival rates of any cancer.

Downie’s older brother, Mike Downie, made an appearance on stage near the end of the set to thank those in attendance, which was met with a rousing applause from the crowd.

“The outpouring of emotion, grief and love has been overwhelming and my family and I have felt it,” Mike Downie explained.

Mike Downie also took the opportunity to talk about the Secret Path Project, which he and his brother worked on together. He says “it’s up to all of us” to help in the reconciliation efforts for the Canada’s Indigenous people.