Federal ethics watchdog Mary Dawson is launching an examination of Finance Minister Bill Morneau’s involvement in a pension bill – that could have benefited a company in which he owned some $21 million worth of shares. 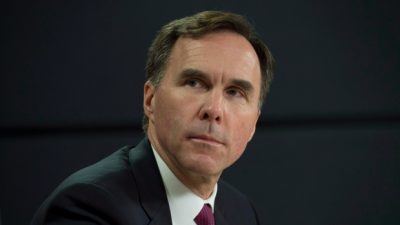 In a letter to NDP ethics critic Nathan Cullen, Dawson says she believes she has “reasonable grounds” to commence an examination of Morneau’s conduct.

The letter points to a section of the Conflict of Interest Act that empowers the ethics commissioner to examine a matter – if she has reason to believe a public office holder has contravened the act.

Cullen had asked Dawson to investigate whether Morneau was in a conflict of interest – when he sponsored Bill C-27.

Dawson had initially said she’d look into the matter and follow up with Morneau – she’s now upgraded that to a full-blown examination.

Bill C-27 would allow pension administrators to convert direct benefit pension plans – to targeted benefit plans – a change for which Morneau had lobbied when he was the head of Morneau Shepell, a pension administration and human resources company founded by his father.