She played the wisecracking Sally Rogers on The Dick Van Dyke Show.

Rose Marie has died at the age of 94.

Rose Marie began working in show business as a child star in vaudeville and worked for nearly a century in theatre, radio, television and movies. 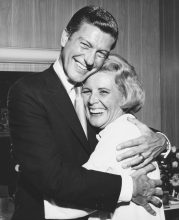 The Dick Van Dyke Show not only was an ideal vehicle for Marie’s comic gifts, but was a showcase for her singing.

Rose Marie was especially proud of playing a woman defined by her work.

“I think I was the first women’s libber on television,” Rose Marie once explained, “I made the same money the guys made, I worked with them.”

Her’s was a rare sitcom character, who at the time of the show in the 1960’s, wasn’t a wife, mother, or housekeeper.

A tribute was posted on her website saying “Heaven just got a whole lot funnier.”