Outraged by the number of deaths on Toronto’s streets, a group of activists plans to stage a so-called “die-in” Monday evening at 6pm at Nathan Phillips Square in solidarity with victims of road violence and in support of road safety. 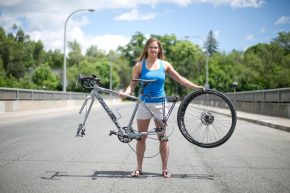 (Jessica Spieker, a member of Friends and Families for Safe Streets who organized Monday’s “die-in,” holds the twisted frame of the bicycle she was riding when she was hit by a driver on Bathurst St. three years ago. Photo Credit: LIZ BEDDALL / METRO)

Organizer Jessica Spieker says 2018 has been extremely bad for traffic deaths, with 16 people killed on the roads since January 1st.

Her group is staging their event to coincide with a Toronto City Council vote on a North York reconstruction project.

According to city planners, Yonge Street between Sheppard and Finch Avenues has numerous challenges including deteriorated boulevards, a lack of pedestrian crossings, medians and dedicated cycling lanes.

There are a couple of options, but councillors have been encouraged to approve a plan which includes streetscape and safety improvements, sidewalk widening and six lanes of traffic on Yonge Street, along with bike lanes on Beecroft Road, which runs parallel to Yonge north of Sheppard.