In 1969, when EMI decided to hire “Wall of Sound” producer Phil Spector to work on the Beatles “Let It Be” album, Spector hired British musician Richard Hewson to add orchestration to “The Long and Winding Road.” They paid him $73.00 for his work. 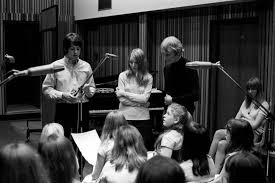 In the process Hewson, who is now 74, changed the Beatles sound with his added orchestrations and managed to annoy Paul McCartney in the process.  McCartney wanted just piano and voice and Hewson says Paul and Beatles producer George Martin were  livid when they found out what he’d been up to.  But they got over it when “Winding Road” became a huge hit.

Hewson went on to work with Diana Ross, Chris Rea (REE-ah) and many others.