IN A BROADCAST FIRST, AN ALZHEIMER'S PATIENT IS TRACKED FOR 10 YEARS

Filmed over ten years, a 60 Minutes report this Sunday April 22nd shows in startling detail the progression of Alzheimer’s Disease in a patient. 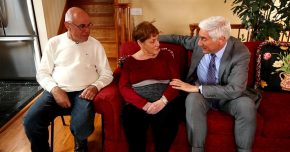 At the start, she was mildly forgetful but functional, although upset at how it had affected her ability to cook, or enjoy books and movies.

Doctor LaPook went back to the couple six more times, and by this past January, Carol Daly was uncommunicative and slumped in a wheelchair with restraints holding her in place.

While there may be clinical studies, representatives at the U.S. National Alzheimer’s Association are unaware of any broadcast report that followed a patient with the disease over this length of time in this manner.