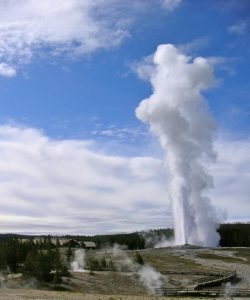 The planet’s biggest active geyser has erupted four times in the last seven weeks – and that has geophysicists excited – about the water feature in America’s Yellowstone National Park.

The Steamboat Geyser can shoot water up to 91 metres high. It erupted last Friday and continued to spew water into Monday.

Steamboat has gone dormant for as long as nine years – and its first eruption since 2014 occurred in mid-March, followed by two other eruptions in April.

Last Saturday, scientists deployed 28 seismographs around the geyser to gather data – in hopes of catching it erupting again – to learn more about Steamboat.