An unprecedented summit between U.S. President Donald Trump and North Korean Leader Kim Jong-un has been thrown into question. 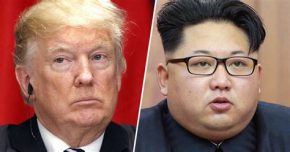 Early on Wednesday, a report on North Korea’s official Korean Central News Agency angrily denounced military exercises between South Korea and the United States as a provocation and called off high level talks with Seoul.

Now there are concerns this move could put next month’s summit between North Korea and the U.S. in jeopardy.

If the summit in Singapore June 12th is cancelled it would deal a major blow to U.S. President Trump’s efforts to score the biggest diplomatic achievement of his presidency.

Trump has raised expectations for a successful meeting, even as many analysts have been skeptical of the chances of bridging the gap due to questions about North Korea’s willingness to give up a nuclear arsenal that now threatens the United States.