The City of Toronto is considering a permanent memorial for those who died one month ago today in the Yonge Street van attack. 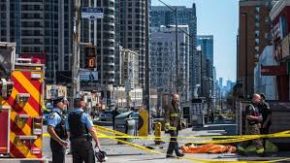 April 23rd, a driver in a white cargo van plowed into pedestrians on the Yonge Street sidewalk south of Finch, killing ten and injuring 16 some of whom are still in hospital.

Toronto Mayor John Tory says the two memorials that sprang up after the attack will remain in place for the next two weeks and some of the material from those will be permanently preserved.

The accused in the attack, 25 year old Alek Minnasian of Richmond Hill, remains in custody.