With the provincial election in two weeks, the Kathleen Wynne Liberals are busy trying to discredit a number of Progressive Conservative candidates. 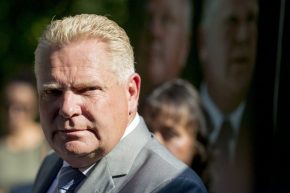 The Liberals plan to release audio of PC Leader Doug Ford and Etobicoke Centre PC candidate Kinga Surma that they say will “implicate” Ford in another nomination and membership controversy.

The recording is to be played at the Liberal party’s downtown Toronto headquarters Thursday morning. A spokesperson for Surma’s office says they are taking this very seriously.

The Liberals are also suggesting a third PC candidate, East York candidate Sarah Mallo, is tied to the operative at the centre of the 407 data breach.

Ford is already facing criticism over two Brampton PC candidates connected to alleged theft of personal information of 60,000 407 ETR customers. One of them, Simmer Sandhu, stepped down last week. The other, Harjit Jaswal, remains the candidate for Brampton Centre.

Ford continues to say that he’s dealing with the mess left by ousted former leader Patrick Brown, a claim Brown denies in a lengthy letter to the Toronto Star.