A Tom Thomson painting that was given away as a gag gift just months ago, fetched almost $500,000 last night at the Heffel Fine Art semi-annual auction sale in Toronto. 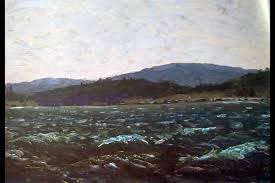 “Sketch for Lake in Algonquin Park” had been collecting dust in a pile of artworks in an Edmonton basement. The owner, 71-year-old Glenna Gardiner, says she used to laugh off her late father’s claims that the painting was created by Thomson, who is often considered the forefather to the Group of Seven.

Gardiner gave the painting to a friend who had Heffel experts verified the painting’s pedigree and valued the sketch at between $125,000 and $175,000.

Gardiner and her friend are going on a Mediterranean cruise with the sale proceeds.