Foreign Affairs Minister Chrystia Freeland will resume her anti-tariff push in Washington Thursday, with support from both Canadians and Americans.

“We’ve heard from a lot of people saying, you know what, we just want to let you know personally, we like the fact that we’re neighbours, we like working together, we like sharing this great continent, and to those Americans, I want to say, we feel the same way,” Freeland detailed on Wednesday. 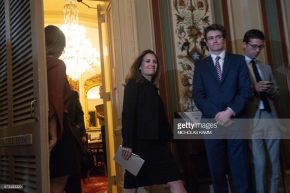 (Canadian Foreign Minister Chrystia Freeland walks out of the U.S. Senate Foreign Relations Committee room to speak to the press)

After denouncing what she calls U.S. President Donald Trump’s “absurd” tariffs on Canadian steel and aluminum during a meeting with the U.S. Senate’s foreign affairs committee, Freeland delivered a foreign-policy speech while accepting a “diplomat of the year” award last night.

Both Republican and Democratic members of the foreign affairs committee appear to be agreeing with Freeland’s argument, including Republican Bob Corker and Democrat Bob Menendez.

Chrystia Freeland is scheduled to be in Toronto late Thursday afternoon for a meeting with Ontario Premier-designate Doug Ford and Canada’s U.S. Ambassador David MacNaughton about the ongoing NAFTA renegotiations.