Patio season on King Street will look different this summer with tables and umbrellas allowed in the curb lanes.

As part of the King Street Pilot Project, space for patios and public seating areas has been created in the curbside lane on King Street between Bathurst and Jarvis Streets. 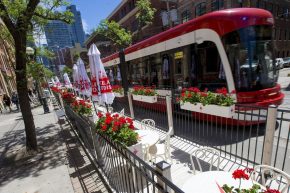 Nine business-operated patios with table service have been approved, with a tenth patio pending. The city also waived the application fee to set up those spaces for the duration of the project.

Since the pilot project began 8 months ago, business owners along King have complained that it’s impacting revenue because there’s no street parking and streetcar service is prioritized over vehicles.

But ridership on streetcars is up significantly along King between Bathurst and Jarvis with much faster service.