The widower of Kate Spade has returned to Instagram with a heartfelt dedication to the late fashion designer nearly two months after her death. 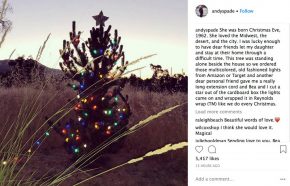 Andy Spade posted a photo late Monday of a tree in the desert that he and their 13-year-old daughter Bea decorated with Christmas lights and a tin foil star made out of cardboard, writing it “was like we do every Christmas.”

He found the tree alongside the home of friends where they were staying “through a difficult time,” rigging it up with the multicolored lights and a long extension cord.

Spade said of his wife, “She was born Christmas Eve, 1962. She loved the Midwest, the desert, and the city.”

55 year old Kate Spade took her own life in New York in early June. Her husband, the co-founder of Kate Spade New York, issued a statement soon after saying she had suffered from depression and anxiety for years.