Aretha Franklin’s invitation-only funeral Friday in Detroit will close out a week of tributes and visitations for the Queen of Soul. 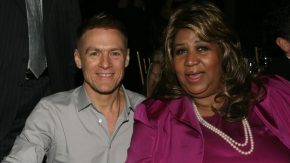 Canada’s own and Zoomer Magazine photographer Bryan Adams is remembering Aretha, with a special memory.

“Aretha Franklin recorded one of my songs called Never Gonna Break My Faith, which was for the film Bobby, and I met with Aretha after she’d done it. It was one of those moments as a songwriter that you just think, hmm wow, I mean nobody can sing like her, nobody. Many have tried and some have close, but nobody will be Aretha Franklin,” Adams explained.

Aretha Franklin had on yet another outfit for a public viewing Thursday at the church where her father once preached. Franklin wore a sparkling rose gold gown and gold sequin Christian Louboutin heels for the viewing at New Bethel Baptist Church in Detroit. She wore a red dress on Tuesday and a blue one on Wednesday for public viewings at the Charles H. Wright Museum of African American History. Mourners lined up for more than half a kilometres to get into New Bethel.