Premier Doug Ford’s revised bill 31 to cut Toronto council to 25 wards is expected to pass with royal assent on Thursday. 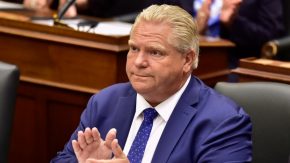 But a new poll suggests the majority of Toronto residents are strongly opposed to Ford’s use of the notwithstanding clause to carry out his plan.

The Mainstreet Research survey finds 65 percent of city residents oppose Ford’s use of the clause, while 56 percent say they strongly oppose.

Meantime, the issue is back in court Tuesday.

Lawyers for the governing Progressive Conservatives will be seeking a stay of a court decision that ruled unconstitutional their plan to cut Toronto council from 47 to 25 wards in the middle of an election campaign.

The stay application, which will be heard before three judges at the Ontario Court of Appeal, could result in Judge Edward Belobaba’s ruling being put on hold until a formal appeal is heard.