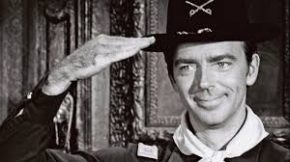 Ken Berry was an actor and dancer and probably best know for playing the affable and accident prone Captain Wilton Parmenter in the 1960s sitcom “F Troop”.

After “F Troop,” Berry went to on to star in “Mayberry R.F.D.,” “Mama’s Family”, and several Disney Films including “Herbie Rides Again” in 1974.