Top house Democrats are suggesting impeachment or prison time could be possible if it’s proven that U.S. President Donald Trump directed illegal hush-money payments to women claiming to have had extra-marital affairs with him.

Court filings in the case against Trump’s former personal lawyer Michael Cohen for the first time link Trump to a federal crime of illegal payments to buy the silence of two women during the 2016 U.S. presidential campaign. 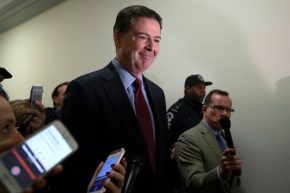 In a question and answer session Sunday evening in New York City, former FBI Director James Comey was asked if the details in the Cohen indictment make Donald Trump an un-indicted co-conspirator in the case.

“It’s certainly close, given the language in the filing that the crimes are committed at his direction,” Comey detailed.

As for Trump’s recent tweets accusing Comey of lying and calling him Leakin’ Comey, Comey explained, “we have to remind ourselves the president of the United States of America is publicly announcing that people are committing crimes, they should be in jail, private citizens, that’s not okay.”