MAY TO HOLD POSTPONED BREXIT VOTE IN PARLIAMENT BY JANUARY 21st

We are learning British Prime Minister Theresa May intends to hold a postponed vote in Parliament on her Brexit deal by January 21st. 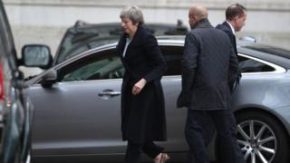 A May spokesperson says the government will bring the divorce deal back to lawmakers once the prime minister has obtained “reassurances” from the European Union about a provision on common customs rules that had drawn widespread resistance from parliamentarians.

James Slack also says that will take place before January 21st, previously seen as a deadline for the government to inform Parliament of its Brexit plan.

May delayed the vote, planned for today, yesterday, acknowledging the deal would be rejected “by a significant margin” in Parliament.

She is meeting EU leaders to seek new wording on the main sticking point, the so-called “backstop,” designed as an insurance policy to ensure an open border between the U.K.’s Northern Ireland and E.U. member Ireland.