Was there political interference in the appointment of Premier Doug Ford’s family friend to the OPP’s top position?

The interim commissioner of the Ontario Provincial Police is asking the province’s ombudsman to conduct an investigation and find the answer to this question.

Brad Blair filed a formal request Tuesday amid what he calls growing concerns about the hiring process of Toronto Police Supt. Ron Taverner to be the new OPP commissioner.

Days after his appointment, the Ford Progressive Conservatives admitted they lowered the requirements for the position to attract a wider range of candidates for the job.

Blair also notes the premier asked for a specific security detail, staffed with specific officers, a request he says was granted by the outgoing OPP commissioner Vince Hawkes.

Blair raises concerns about a potential violation of financial policies. The interim commissioner says the premier’s chief of staff, Dean French, asked the OPP to purchase a “larger camper type vehicle and have it modified to the specifications the Premier’s office would provide.” Blair notes that French “then provided specifications and costs via a document from a company,and asked that costs associated with the vehicle be kept off the books.” 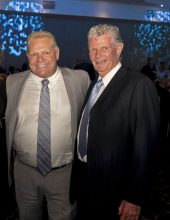 72 year old Taverner was named as the next OPP commissioner last week and is to start his new job Monday.

Ron Taverner has been in policing since 1967. Most recently, he was the unit commander of Toronto’s 12, 23 and 31 Divisions, which encompass large parts of Etobicoke.