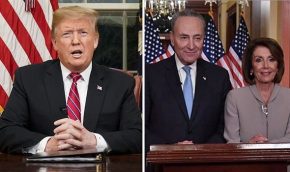 “Over the years, thousands of Americans have been brutally killed by those who illegally entered our country,” Trump declared,”and thousands of more lives will be lost if we don’t act right now.”

Trump suggested that building a wall between the United States and Mexico would be an “act of love” because walls protect the people inside them.

Top congressional Democrats (Chuck Schumer and Nancy Pelosi) used their airtime following Trump’s address to say Trump “has chosen fear” in his drive to build a border wall, and called on him to reopen the government shuttered for 18 days because of the standoff over his demand for $5.7 billion in wall funding.

“President Trump must stop holding the American people hostage, must stop manufacturing a crisis, and must re-open the government,” said House Speaker Pelosi after his address, adding” that Trump’s rhetoric has been “full of misinformation and even malice.”

Political analysts watching Trump last night pointed out he offered a number of false statements. Among them, Trump said that the situation at the U.S.-Mexico border is a national crisis, when in fact, the apprehensions at the border in 2001 were 700,000 more than this past year of about 300,000.