A woman in her 70s was taken to hospital with serious injuries Wednesday evening, after she was hit by a vehicle that left the scene in the Sheppard Avenue and Allanford Road area of Scarborough. 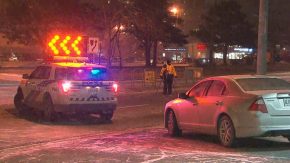 The incident comes after a record year of pedestrian and cyclist deaths in Toronto, and after Mayor John Tory acknowledged that the Vision Zero road safety program is not working.

Mayor Tory told Zoomer Radio’s Fight Back with Libby Znaimer, he’s trying to figure out why 40 percent of last year’s pedestrian deaths happened in Scarborough, “when they don’t have 40 percent of the population or land mass of Toronto.” Tory went on to say he asked city officials to take a look at all the people who lost their lives in Scarborough this past year and see what common characteristics there were in these deadly collisions.

Vision Zero was announced by Mayor Tory two years ago and aims to reduce the number of pedestrian and cyclist deaths to zero.