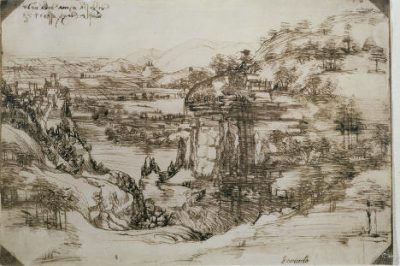 The first-ever scientific study of a drawing Leonardo da Vinci created early in his youth – shows he added details to an earlier sketch.

The 1473 work Landscape Drawing for Santa Maria della Neve – is being studied in Florence.

Initial microscopic examination at the Uffizi Galleries shows Leonardo worked on the drawing in two distinct phases – so it’s less likely the piece was a sketch of an actual place in his native Tuscany, as some have suggested – and that he imagined the details he added later.

The world-famous gallery only occasionally displays the work – which is Leonardo’s earliest known drawing – because it’s extremely fragile. But on April 15th it will go on display for five weeks in the town of Vinci – as Italy marks the 500th anniversary of Leonardo’s death.