The charges were in the hundreds during last week’s distracted driving blitz here in Toronto. 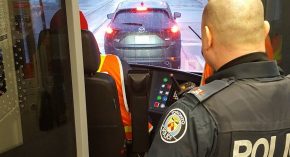 In fact, Toronto Police charged 670 drivers who are accused of using handheld devices while operating a motor vehicle.

The blitz implemented a new way of catching distracted drivers, by having officers on streetcars and tow trucks so they would have an aerial view on driver behaviour.

Mayor John Tory says, “I’d like to see the blitz run all of the time and that people learn the lesson because they either hear from someone else or experience themselves these very substantial fines and demerit points, and I think in some cases you can lose your car and your license, so people hopefully will wake up before that, as they had to do with seat belts, as they had to do with drinking and driving, and just stopping looking at your cellphones, stop texting, please. Think of your fellow citizens, think of yourself, in terms of your own safety.”

Stricter penalties for distracted driving went into effect on January 1st. The distracted driving blitz was conducted at the same time as a similar zero tolerance crackdown on drivers who stop or park illegally during rush hours.