Music legend Carlos Santana plans to celebrate this summer’s 50th anniversary of his appearance at Woodstock by playing at the anniversary concert on the original Woodstock site in Bethel, New York. 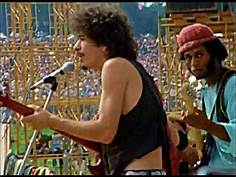 Santana and his band will be the house band at this summer’s festival “to honour the other musicians who were the original Woodstock performers.”

The 71 year old says he’ll just be doing his job.

Santana will celebrate the music of Woodstock and the 20th anniversary of his “Supernatural” album with a concert tour that begins in June in Arizona.