Heart disease is the leading cause of death for Americans, with about 750,000 people suffering heart attacks every year. 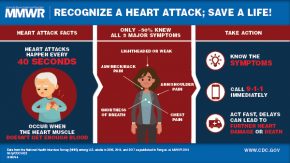 Researchers say that while chest pain is a typical symptom of a heart attack, sometimes it can present more subtly as shortness of breath or lightheadedness.

Studies show that between 2008 and 2017, more Americans were able to identify symptoms of a heart attack.

But some groups, including younger people, men, racial minorities, and the less educated, were less likely to be able to do so, highlighting a need for ongoing education.

Fortunately, there was also an increase in the number of people who knew to call 911 for a suspected heart attack, with almost 95 per cent of people guessing correctly.

The study is found in CDC’s Morbidity and Mortality Weekly Report.