The legendary Diana Ross took the stage at the Grammys Sunday night in honour of upcoming 75th birthday. 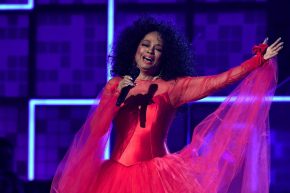 Introduced by her grandson and wearing a dress of flowing bright red chiffon, Ross also went out into the audience at the Staples Center in Los Angeles that included her fellow Motown star Smokey Robinson and Motown founder Berry Gordy.

Diana Ross has been nominated for 12 Grammys, but has never won except for a lifetime achievement award in 2012.

She talked to the crowd throughout the performance and ended it by twice declaring, “Happy birthday to me!”

As for how Canadians fared at the Grammys, Toronto’s ambassador Drake won the Best Rap Song Grammy last night for God’s Plan.

Canadian R and B singer Daniel Caesar has won his first Grammy Award.

Other Canadians scoring awards during a pre-telecast ceremony included violinist James Ehnes who received two for his contributions to Kernis.

Producer Greg Wells who was among the team who won best compilation soundtrack for visual media for The Greatest Showman. The Peterborough, Ontario-raised musician helped shape the selection of songs from the Hugh Jackson-led Hollywood musical.

Willo Perron, who is from Montreal, nabbed the best recording package Grammy for his work on singer St. Vincent’s 2017 album Masseduction.