Best known as the federal finance minister to former prime minister Brian Mulroney, Michael Wilson has died at the age of 81.

Wilson was also a diplomat and longtime mental health advocate.

His death was confirmed last night by the University of Toronto, where Wilson served as chancellor from 2012 until last year. 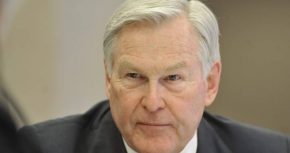 Wilson served as Progressive Conservative MP for Etobicoke-Centre for over a decade and held multiple cabinet positions under prime ministers Brian Mulroney and Joe Clark.

He helped negotiate the North American Free Trade Agreement and introduced the federal goods and services tax. and for more than three years until October 2009, served as Canada’s ambassador to the U.S.

Wilson became an advocate for mental-health issues after his son Cameron took his own life in 1995 at age 29.

Former prime minister Stephen Harper, who appointed Wilson as Canada’s ambassador to the U-S in 2006 for three years, says Wilson served Canada with “exceptional skill and dedication” and “embodied the best of public service.”