Here’s a story with a happy ending.

It involves Jeff Burke, a Toronto busker and street musician, who had his bassoon taken when he took a break from playing in the City’s subway system. 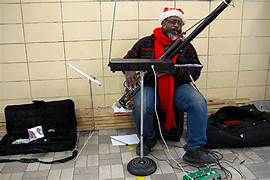 At the time, Burke spoke about the deep emotional attachment he had with the instrument, saying his now deceased father helped him buy it by co-signing a bank loan 32 year sago.

A tweet from the TTC yesterday offered this update.

“We are super happy to have reunited Jeff Burke with his bassoon today. It was turned in to the TTC’s Lost Articles Office in January. One of our awesome employees saw a story on the news, connected the dots and we contacted Jeff today.  Good work, team! Happy bassooning, Jeff!”