Former Guantanamo Bay prisoner Omar Khadr will learn next month if he is to have his 8 year sentence for war crimes declared expired. 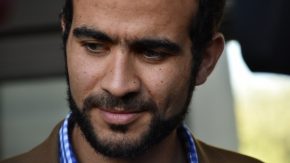 The 2010 sentence would have ended last October had Khadr remained in custody, but he was freed on bail in 2015, stopping the clock as he appealed the American military conviction, a process that could still take years to resolve.

The Crown has argued that Khadr should serve the remainder of his sentence in the community.

The decision will be handed down in an Albertan courtroom on March 25th.