A former pillar of Canadian newspaper publishing has died. 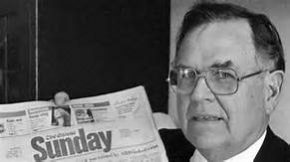 Clark Davey was the one-time publisher of newspapers in Ottawa, Vancouver and Montreal and was a driving force behind the creation of one of Canada’s most prestigious journalism awards.

Davey had a long career that took him from local reporting in Chatham, Ontario, to Parliament Hill and foreign corresponding, to a 15-year-stint as managing editor of the Globe and Mail.

He was a founding member of the Michener Awards Foundation, which hands out the annual award for outstanding public service journalism and named for former governor general Roland Michener,

Davey died yesterday in an Ottawa hospital. He was 93